Most of this page was translated from http://demura.net/archives/9ode by Babel Fish Translation.
Sorry for strange and funny English from “the Chinese room“. 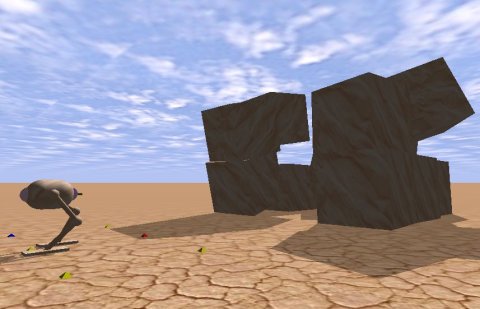 A sample screenshot of modified texures (details on RoboCon MagazineNo.50)

This is 19th article about ODE (Open Dynamics Engine) Tutorial. ODE is an open source physics libary, and it is widely used  in various game software, and simulators in research.

This time, I explain how to customize the drawstuff , the 3D graphics library, which has been attached to ODE with a free gift. Drawstuff being to be the very used OpenGL simple library is useful to also the study of OpenGL. You viewing one time source code, how, probably will be?

3 kinds of textures
In the draw staff just texture of 3 types which are shown in the rough sketch is used. As for these filesusingstandard ones which are called ppm (portable pixmap) format, it is under ode-0.8/drawstuff/textures. The user does not appoint the texture of the sky and the ground, it is applied automatically, but, using dsSetTexture (DS_WOOD), it sets the texture of the object. When cancelling setting, dsSetTexture (DS_NONE) is used.

Note: It has converted texture in the upper figures to jpg format in order to indicate with the browser.

Modification method of texture
When using the GIMP, the GNU image maniplulation program, you can save the texture file as raw (raw) mode of ppm type, and overwrite the texture file on the original texture file. The new teture becomes effective. As for size sky.ppm 128×128 pixel, ground.ppm and wood.ppm has become 256×256 pixel.

Advanced modification
Being to be able to modify, it does, texture with this but, being boundary of the land and the sky continues to be the standard color grey a little it becomes matter of concern. In order to modify this color, it is necessary to rewrite the source code of drawstuff. Until now, the source code is rewritten, please try challenging also the one which you think that how it is awesome. The fact that the source code is customized steadily is Daigo taste of the open source.

This time with this end.