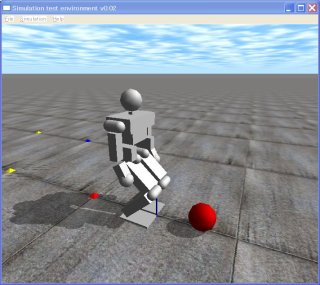 A humanoid robot powered by ODE

This is the first ODE tutorial. Thank you for visiting demura.net.

ODE (Open Dynamics Engine) , an open source physics engine, has been developing by Russell Smith since 2001. A simulator, like an above figure, can relatively easy to be created.Our RoboCup team,  team WinKIT,  has been using ODE to create a RoboCup simulator.

Major features are listed as follows,

Next time, let’s install ODE and the development environment.